Join Pak Army as Soldier 2018, Written Tests. Written Test for entries of soldiers, matric and above is an important segment of induction process. Pattern of question paper will be on the following lines:- 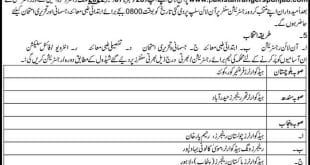 Pakistan Rangers Jobs 2022 latest advertisement in Pakistan. candidates from all provinces can apply for …

Powered by ALL JOBS PK | Project of IT Logix (Pvt) Ltd
© Copyright 2022, All Rights Reserved